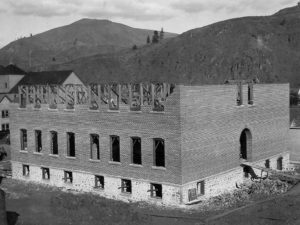 Construction began in 1911 when Peter Jess, a stone worker, and a crew from the town of Methow built the rock and cement foundation. Meanwhile, Otto Hoffman and Peter Filer created the bricks for the remaining portion of the building. The bricks were handmade from clay taken from a hillside near the current junction of Highway 20 and State Route 153. $12,109.68 later, the building was complete, and opened its doors on Monday, Jan. 15, 1912, as the Twisp School.

In 1940, a $50,000 addition added more classroom space, a library, a typing room, a study hall, and the gymnasium and locker rooms. A new heating system was also installed. The high school relocated to a new wing in what is today’s Methow Valley Senior Center.

Students from the school have all sorts of fond memories, including the time the boys put a goat in the superintendent’s office above the gym, and the day a cow tipped over the outhouse, trapping a girl inside. Let us not forget the dungeon—aka the lunchroom—that was in the basement and occasionally served up some of the valley’s plentiful roadkill. Not so fond memories included teachers who rapped knuckles with rulers and pitched pieces of chalk at students’ heads.

In 1973, the rival Twisp and Winthrop schools consolidated after the completion of a new high school located between the two towns, and that year’s class was the last to graduate Twisp High School. The building was abandoned and sat empty for five years, slowly falling victim to the work of time and vandals. Windows were broken, and pipes had flooded the gym floor.

The school district considered demolition, but the cost was estimated at $600,000 dollars. Fortunately, the community banded together and cleaned up the building, repaired leaks, replaced or boarded windows, and hauled out the trash, all out of pocket. The building was reborn as the Methow Valley Community Center in 1979.

It was then that the Twisp library rented a room, the Methow Theatre formed, and a recreation center for area youth was set up in the basement. Early emergency radio transmitted from the office. Red McComb, a local entomologist, had an upstairs office. The senior center took over the newer wing and is still independently operated. Many business started here, including Room One Resource Center and Door #3 Print Studio.

The Community Center has seen lean times over the years. Nearly closing due to lack of operating funds, many locals have held fundraisers to help, including the Mexican Fiesta, Freeze Yer Buns Race, Fabulous Fall Follies, roller skating parties, bingo, and many others. The Twisp Alumni Association has also raised thousands of dollars to preserve their alma mater. Countless volunteer hours have helped see the building through to present day.

We have replaced the roof, converted the coal-burning boiler into a waste oil burner, and replaced all of the windows and most of the floors. We have installed acoustic panels in the gym to improve the sound, and added a speaker system for events. We are in the middle of remodeling the kitchen with new appliances, floor, cabinets, and doors. The accumulated total of these improvements is estimated at over $500,000.

We continue to rely on community support to maintain this community treasure. Learn more about how you can help.